I’ve always been fond of Matthew McConaughey. Before his unfortunate typecasting in insipid romantic comedies throughout the 2000s, he had already displayed discernible range in the previous decade with his hilarious turn as David Wooderson in Dazed and Confused, moving onto a brief yet effective dramatic part in 1996’s Lone Star and the lead performance in the nail-biting legal thriller A Time To Kill that same year. After a noteworthy portrayal of celebrated attorney Roger Sherman Baldwin in 1997’s Amistad, he waded through some mediocre efforts before another compelling role in Frailty and then proceeded to slap his face onto a slew of lowest-common-denominator drivel. It’s not all that bewildering (the man is a handsome charisma machine, and he has bills to pay), but it was nevertheless frustrating as there were a plethora of people out there who knew he was capable of far superior feats.

After the horrible Ghosts Of Girlfriends Past, McConaughey took a two-year break from acting before rocketing back to form in the much-heralded ”McConaissance”, beginning in 2011 with The Lincoln Lawyer and continuing over the past 9 years with acclaimed performances in Mud, Dallas Buyers Club, The Wolf Of Wall Street and Interstellar. It was a sight for sore eyes, vanquishing fears that he was to be consigned to the ‘it’s-that-rom-com-guy’ dustbin and his earliest roles would be utterly forgotten. He would exponentially solidify notions that he was anything but just a pretty face with the insanely brilliant 2014 television series True Detective, utterly unrecognisable as the cerebral and pessimistic burnout Rustin Cohle.

My personal favourite McConaughey performance inhabits a film released the same year as The Lincoln Lawyer, and it’s a picture that has fallen below the mainstream radar but thankfully accrued a robust cult following. William Friedkin’s Killer Joe, an adaptation of the acclaimed play by Tracy Letts, is an uproarious, bizarre and uncomfortable black comedy thriller, McConaughey taking the lead in an array of top-tier performances that propel an unpredictably demented tale of dysfunction and mayhem.

Chris Smith (Emile Hirsch) is a twentysomething drug dealer living in squalor in West Dallas, Texas. Having been thrown out of the home he shared with his mother due to ceaseless arguments, Chris approaches his dim-witted father Ansel (Thomas Haden Church) for help, the latter residing in a dilapidated trailer park with Chris’ stepmother Sharla (Gina Gershon) and sister Dottie (Juno Temple). As his mother Adele has stolen the money that he owed to a ferocious local drug syndicate, Chris has engineered a cunning plot that will prove beneficial to himself and his extended family. 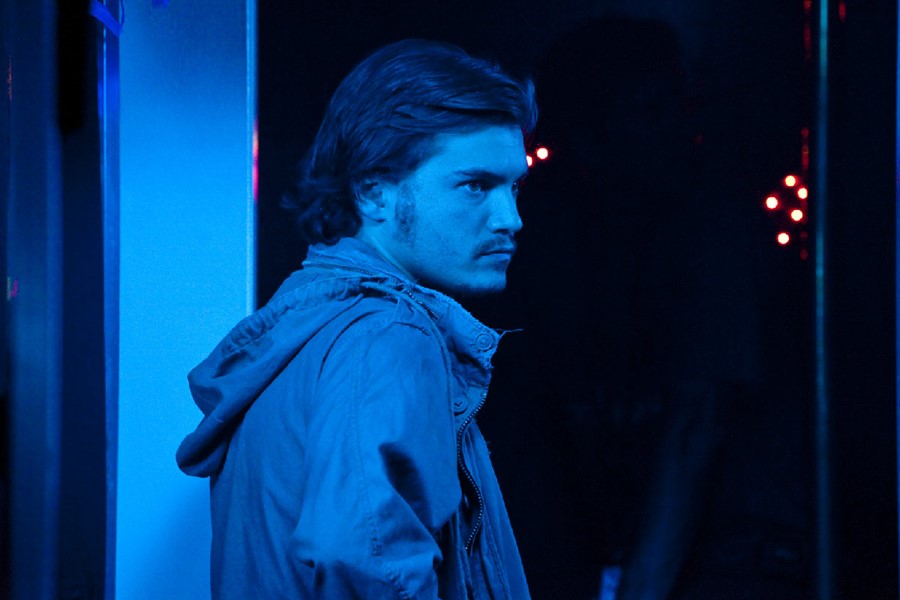 Joe Cooper (McConaughey) is a well-liked and anachronistically genteel local police detective who happens to moonlight as a hitman. Privy to Adele’s $50,000 life insurance policy bequeathed to Dottie, Chris figures that he can kill several birds with one stone by ridding the world of his pathologically selfish and cruel mother, paying off his gangster creditors and splitting the remainder between himself and Ansel, presuming that Dottie would naturally share the inheritance. Seeing Joe as the best person for the job due to his reputed discretion and clean work ethic, Chris sets up a meeting.

Tersely communicating his rule that they must keep their mouths shut under pain of death and demanding every penny in advance, Joe is ready to vanish as soon as he appeared when Chris attempts a negotiation of his lack of immediate funds. It’s at this point that Joe lays eyes on Dottie milling around outside the building, becoming instantly transfixed by the young woman. Joe throws an impromptu proposition Chris’ way, stating that he’ll perform the hit in exchange for ‘retaining’ Dottie i.e. claiming her as collateral against the insurance payout.

Reluctantly agreeing the utterly creepy terms, Chris can only watch in bemused horror as Joe begins an intimate relationship with his younger sister, effectively moving into the trailer and worming his way into the family dynamic. With the job detail becoming inexorably more tangled than he could have envisioned, Chris must contend with burgeoning second thoughts, Joe’s increasing power-hold over Dottie and the wrath of Digger Soames (Marc Macaulay), the cheerfully psychopathic local drug lord who is quickly losing patience with Chris’ failure to pay his debts.

As much as Killer Joe sates my appetite for scumbag-ridden neo-noir, the facet that brings it front-and-centre into favourites territory is how goddamned funny it is. Traversing deadpan humour, gross-out schtick and Lynch-like levels of character eccentricity, it’s a guaranteed riot for viewers with a weirdo funny bone like yours truly, every performer completely on point in their delivery. Thomas Haden Church provides comedy gold as the moronic Ansel, gormlessly following his ne’er-do-well son’s lead and bickering with Sharla, his foul-mouthed and narcissistic trailer trash queen played with transformative brilliance by Gershon, a world away from her typical sexy-and-enigmatic territory. The longer we stay with all of these characters, the more this place begins to feel like an open psychiatric ward as opposed to a garden-variety town in rural Texas. The film’s vein of irreverence is perfectly complimented by its unofficial theme song, the jauntily obscene ‘Strokin” by Clarence Carter.

Emile Hirsch and Juno Temple are highly believable in their portrayals of Chris and Dottie, the amoral, opportunistic and irritatingly entitled and whiny young layabout who sets the ball rolling and his infinitely more likeable little sister, the detached and jejune daydreamer who is precocious in every aspect except her mind. Dottie possesses an adorable innocence that sets her apart from the hilariously revolting selfishness of everyone around her, her idiosyncrasies immaculately balanced by McConaughey’s portrayal of the titular character. 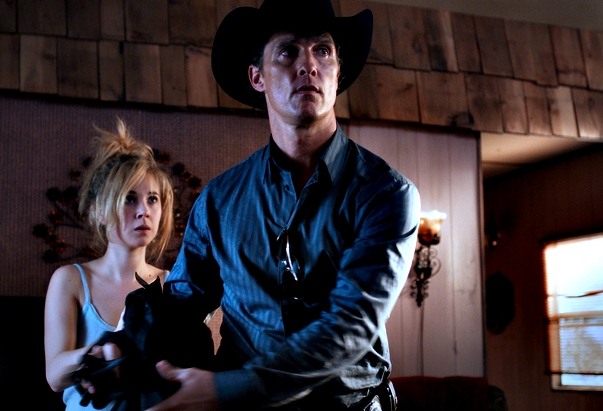 To use a cliched yet nevertheless accurate descriptor, it’s a role he was born to play, Ol’ Matt’s distinctive Texan drawl and mannerisms ensuring a positively electric presentation of this counterintuitively decorous sociopath. Joe is stoic and no-nonsense in his exchanges with Chris & Ansel, but he rarely uses foul language. When it comes to ladies, he is nothing short of an old-fashioned Southern gent, atavistically courting Dottie with mindful smiles, pleases and thank yous, politely enquiring if he may serve at dinner, and the virtually extinct offering of a first-date bouquet. Granted, he’ll put a bullet in anybody if the price is right, but that doesn’t make it acceptable to be rude. The quirky juxtaposition of Joe’s etiquette and his propensity for sudden and extreme violence helps to make his and Dottie’s romance a weirdly wholesome one, especially in contrast to the explicit scumminess of surrounding players.

His second adaptation of a Letts play after 2006’s Bug, Killer Joe easily stands as one of Friedkin’s strongest works. He draws maximum effort from all of the focal actors, and my intuition tells me that the entire team must have had an absolute blast creating it. So committed was Friedkin to uniformly retaining the impact of the film, he outright refused any suggestion to edit scenes of violence and sexuality. Every single grimy, emetic detail from the play is commuted to screen and is masterfully captured by the stylish and dynamic cinematography of Caleb Deschanel, very much making the audience feel as though they were stuck on the most nightmarish long weekend with the most insane human beings possible. It is immersively disturbing, but it’s executed with so much twisted whimsy that I can’t imagine it as a depressing or scarring experience. Then again, I might just not be very well-adjusted.