Colonialism. It’s not very nice, is it? The practice of asserting your nation’s authority over that of another hapless country and its people, eroding their freedoms, identity and will via military aggression, imprisonment and torture and cultural ‘re-education’ surely leaves a bad taste in the mouth of any reasonable person (it’s rather troubling that you can still encounter individuals who receive criticism of the British Empire as some kind of personal attack). Thankfully, the bulk of cinematic examinations take an oppositional viewpoint as well.  Whether it’s the rousing and triumphant tenacity of Ben Kingsley in Gandhi, the repulsive arrogance of complacent and hedonistic British toffs in the Kenya of White Mischief or the more recent and very pronounced brutality of Jennifer Kent’s The Nightingale, the reality of a domineering nation’s character is never in keeping with the revisionist fantasies touted by deluded jingoists.

And that’s a good thing, because nobody should be sold the idea that this variety of expedition was conducted with a respect for fundamental human dignity, historical evidence suggesting anything but. In terms of a cinematic narrative, however, there is only so much mileage that can be milked from a ‘colonialism is bad’ template, the scenario bearing the most fruit in its utility as a backdrop for a murder mystery, revenge thriller or biopic of a singularly strong and determined historical figure, as it is in the aforementioned examples. Waiting For The Barbarians, Ciro Guerra’s adaptation of the eponymous novel by acclaimed South African author J.M. Coetzee, is a beautifully shot and strongly acted affair that deftly handles its themes of a crisis-of-conscience and the unpardonable cruelty that exists in the hearts of men, even if it brings little else to the table.

The Magistrate (Mark Rylance) is in command of an outpost situated somewhere in the desert regions of ‘The Empire’. As is the case in the source novel, this protagonist and the imperious nation from which he hails are both left unnamed as to make a comprehensive point about colonialism rather than tether it to one country or another (the land’s indigenous inhabitants and their spoken language are Mongolian in the film). A well-read, authoritative and amiable figure, the Magistrate is a fair man and a good judge of character, managing the settlement with as much non-violent and reasonable adjudication as possible. 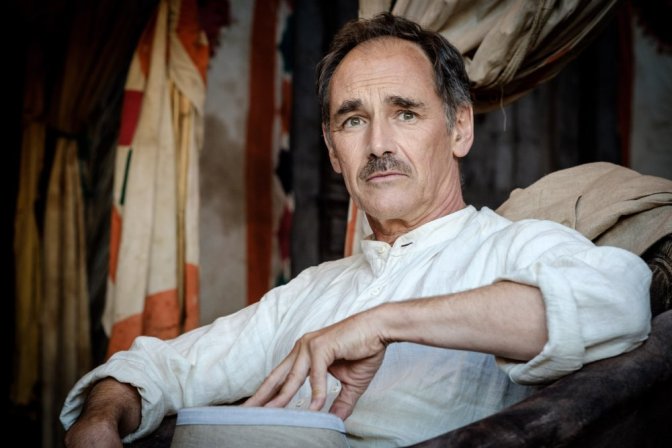 Matters are ticking over nicely until the arrival of one Colonel Joll (Johnny Depp). A dismally formal and officious sort, Joll demands a briefing on military activity in the region from the Magistrate, citing long-repeated notions of a potential uprising among the native population or ”barbarians”, as they’re so respectfully called by Joll and other top brass. Despite the Magistrate’s insistence that the area has been skirmish-free for a considerable amount of time and that no substantive information concerning an uprising has reached the outpost, Joll obstinately sticks to his assertion, apprehending and brutally interrogating an elderly indigenous man and his nephew on unfounded charges of sheep rustling. 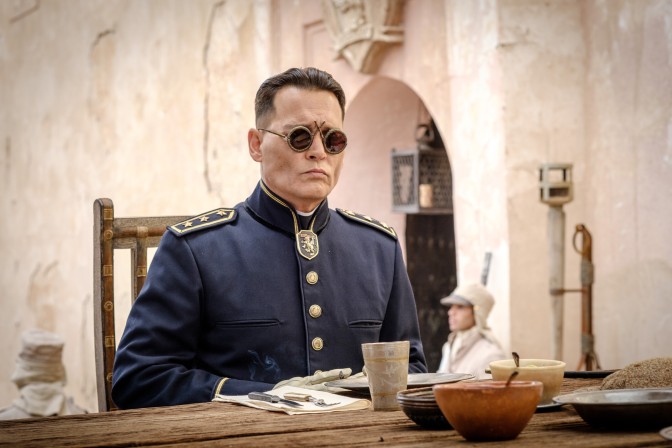 After capturing and imprisoning several members of the same tribe as the aforementioned natives, Joll proceeds to extract a ‘confession’ of a conspiracy to revolt among them, using this as justification to gather troops and make haste into the surrounding terrain for a more ferocious operation. Incensed and disgusted by the Colonel’s behaviour, the Magistrate witnesses his departure and then angrily demands the release of all prisoners. Sometime later, the Magistrate notices that one of the former prisoners has remained in the settlement, a young woman (Gana Bayarsaikhan) who begs for money and struggles to move around on crutches, courtesy of two broken ankles that Joll’s subordinates were kind enough to bestow upon her. Feeling sharp contrition for being part of a regime that could do such things to fellow human beings, the Magistrate provides the girl with food and shelter and carefully attempts to heal her injuries.

Endeavouring to return the girl to her home, the Magistrate escorts her through the vast desert landscape with the help of other outpost personnel, growing closer to her as he learns of the hardships and sadistic treatment she has received under the rule of the empire. Unfortunately, word of the Magistrate’s unauthorised leave and mission has reached Colonel Joll, who took a dim view of our hero the instant he realised their divergence in philosophy, and the latter is convinced that the Magistrate is involved in treacherous plans of sedition with the ‘enemy’, an accusation abetted by Joll’s equally malevolent toady Officer Mandel (Robert Pattinson). The Magistrate’s various acts of kindness potentially see him on the receiving end of some very sinister lessons about the mindset of those who proudly carry the flag of conquest and subjugation. 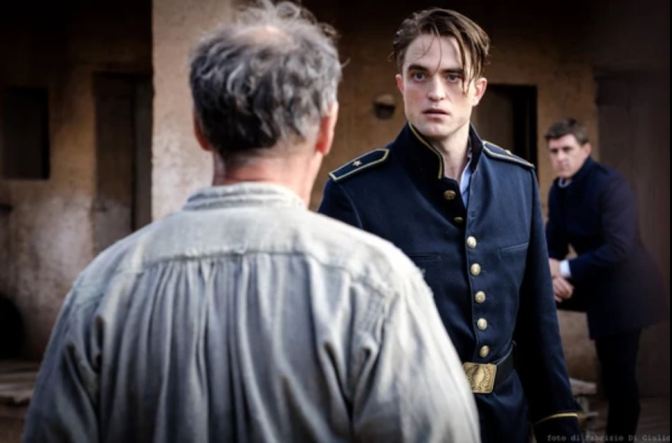 First and foremost, the casting here is terrific. Rylance exudes charismatic passion and empathy as the Magistrate, a man who makes no secret of his wish to remain absent from the victor’s history books and merely be remembered as a decent fellow by those who encountered him. His pained reaction to the tortures that he witnesses are highly authentic and upsetting, fully illustrating the price of possessing a heart amidst those who perpetuate injustice blithely. Depp was seemingly born to portray Joll, a blase sadist who reciprocates nothing of the normal range of human emotions, his tendency of hiding behind witchy-looking sunglasses being evocative of the same almost-inhuman menace of Boss Godfrey in Cool Hand Luke. As events unfold, it becomes apparent that Joll relishes in presenting his ‘interrogations’ as a spectacle for other outpost inhabitants, rendering him a face of the most satanic and megalomaniacal strains of racism. Pattinson has limited screen time, but he paints a satisfactorily odious little shit in the form of Mandel.

Chris Menges’ incredible cinematography, photographed on location in Morocco, immerses the viewer in a simultaneously beautiful and threatening environment, both the perishing heat and cool night air being tangible in the plaintive solace of the outpost.  The mysterious performance of Gana Bayarsaikhan (credited here as ‘The Girl’, as her character is also referred to in the novel) bolsters the notion that there is, in fact, no bloodthirst or plans for insurgency among the native population, merely a bitter sadness at having to suffer for false accusations of insubordination and utterly unpalatable presumptions of civilisational superiority. She recognises the Magistrate as a good person and is grateful for his active compassion, but she bluntly and inevitably reminds him that they couldn’t have a long-lasting connection of any sort, given the entity that he is tied to.

As convincingly acted and mesmerising to look at as the film is, one can see how the source material may have won the Nobel Prize for Literature but the subsequent screen adaptation is a little more polarising. A character’s moral treatise on the pitfalls of colonialism makes for a compelling read, but the transference of the narrative to screen plays out as an exercise in inevitability. The good man is powerless against the bad men, the ‘barbarian’ girl he develops affection for is unyielding in her quest to go home and forget all about it, the hero suffers for his attempt to deviate and the world keeps on turning. I’m certainly not saying that there should have been some grand arc of retribution, as that would be flippant in context, just that the protagonist’s ruminations on his career and experiences are tenfold more provocative, both emotionally and intellectually, in written form. It’s a commendable film, but it doesn’t alter the reality that the pacing is quite languid, punctuated by a few deeply unpleasant sequences of Joll brutalising the native population.

In the final analysis, I’ll say see it. The performances and visual experience make it worth it, a technical triumph it unequivocally is. It might not provide any novel edification, and despite being under two hours it feels longer, but it is ultimately convincing as a humanistic and moving picture. It made me sad and angry, as it bloody well should have.