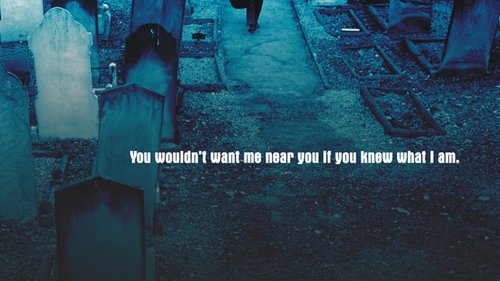 As you might be aware if you’ve indulged some of my other reviews, I’m quite the sucker for crime cinema. With some caveats, mind you. Guy Ritchie & Nick Love films are chock full of both intentional and unintentional amusement (the latter variety is peppered throughout Love’s oeuvre), but when it comes to reeling off the cream of the crop, those two, anyone who creates yet another spin on the dull and knackered ‘Essex Boys’ yarn and the makers of hip, postmodern Tarantino-lite gangland flicks can all go and swivel. My patience quickly dwindles whenever I’m confronted with depictions of ‘cheeky chipper chappy’ mobsters or weird and silly hipster-like thugs who talk in idiosyncratic slang and endlessly waffle on about pop culture and offbeat topics (Pulp Fiction is a great film, its clones are in the premier league of cinematic affrontery).

Give me the real deal, the stuff that eschews the glitz, glamour and irony and rubs your nose in how utterly ugly a life of crime can be. Get Carter, The Long Good Friday, State Of Grace, Heat, Thief, A History Of Violence (this life could easily go on ad nauseam so I’d best nip it in the bud here), these pictures don’t have ‘funny’ crime lords or henchmen or ‘hilarious’ gaffes, and they certainly don’t relate the criminal lifestyle as one of ebullient hijinks such as The Business or The Football Factory (yes, I know the footie firms aren’t gangsters in the traditional sense, but if it looks like a duck). They serve up the underworld as it is, a sordid, callous realm of heartless sadists and exploiters. It’s the relatively authentic strand of presentation where there is truly no honour among thieves whatsoever, and the average ‘lad’ wouldn’t last two minutes there. Mr In-Between, a little-known British effort and the only film directed by Canadian cinematographer Paul Sarossy is a quasi-surreal, unforgiving and disturbing journey into a nightmarish netherworld of organised crime, fractured identity and forbidden love.

Jon (Andrew Howard) is a thirtysomething loner living an outwardly humdrum life in South London. Introverted, steely-eyed and hypervigilant, Jon is neither friendly nor in possession of any friends, but it’s no cause to feel sorry for him, and they’d only be impeding on his carefully coordinated lifestyle anyway. Obsessively fastidious and punctual, Jon lives in an impressive modernist house with an abundance of highbrow literature and more cash bundles sitting around than he could possibly spend in a lifetime. There’s a reason this seemingly shy, subtly menacing odd bod is so isolated, wealthy and compulsively ordered: Jon is a professional killer, and an egregiously brutal one to boot. 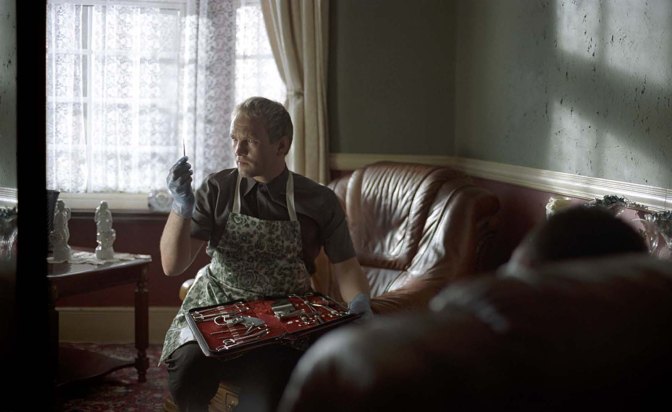 Jon works for a figure known only as The Tattooed Man (David Calder), an organised crime boss who inhabits an utterly weird subterranean abode beneath the bustle of the capital. A sharply intellectual gentleman with a staggering knowledge of philosophy, The Tattooed Man advocates a life ethic of honest reckoning with one’s basest instincts, a Machiavellian, Social-Darwinist outlook that insists that cruelty, domination and hedonism are hardwired into human beings, and that to try to suppress them amounts to abject cowardice. As a consummate sadist, he provides Jon with photographs and other itineraries of those who have crossed him, insisting that the targets endure vicious torture before their demise, both as a deterrent to other chancers and as gratification for The Tattooed Man’s warped affinity for suffering. Jon goes out tooled up with firearms for practical purposes, but it’s the horrifying surgical kit he keeps on his person that distinguishes him from your average assassin.

Perusing the crime scene of his most recent job one afternoon, Jon runs into Andy (Andrew Tiernan), his best friend at secondary school who he hasn’t seen in almost a couple of decades. Excited to see his closest mucker in the flesh after so long, Andy regales an uneasy Jon with woeful tales of his unemployment, his wife and child subsisting on government benefits and hand-me-down clothes whilst he struggles with boozing his days away and eking money from wherever he can. Escorting a highly intoxicated Andy back home, Jon is reacquainted with Cathy (Geraldine O’Rawe), Andy’s wife and their mutual school friend whom Jon was once besotted with. She promptly invites Jon to Sunday dinner, which he accepts much to his own surprise. 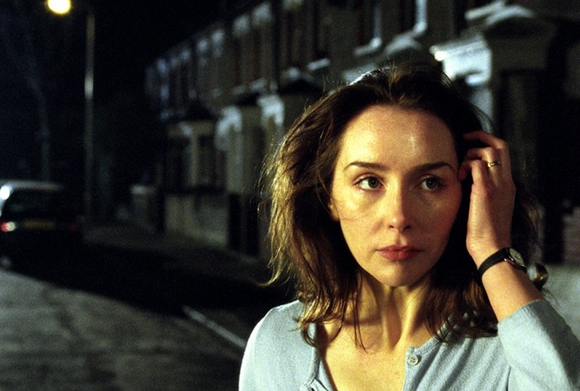 Having spent years cultivating a solitary existence and keeping his flirtations with normality restricted to occasional chats with wasters down the local pub, Jon is overwhelmed by emotions that have essentially been trained out of him by his monstrous master, developing a genuine affection for Andy and his family and feeling a spark once again with Cathy, a sentiment that is slowly but surely requited. As you may have guessed, this is no setting for a Happily Ever After. Jon has been in an existential thrall to The Tattooed Man since he was a teenager, conditioned to display unquestioning loyalty and even love for this underworld potentate. In true Old Testament God fashion, The Tattooed Man is absolutist and jealous, and as his demands and his suspicions become more extreme, Jon finds himself in the mother of all tumults, wrestling not only with his newfound identity crisis but his struggle to keep his new companions safe from the wrath of his diabolical employer. A terrifying love triangle, indeed.

It may seem strange to say, considering I’m writing this piece from the standpoint of encouraging the viewing of Mr In-Between, but it must be honestly stated that the film is not without its flaws. In my view, it is a predominantly successful work, but there are moments where performances and dialogue leave something to be desired, and a minimal budget has rendered it difficult to create a completely faithful adaptation of Neil Cross’ superior source novel. There is admittedly a nostalgia quotient in the details, as I first heard about the film and sought it out upon its release in 2001 when I was a strange and difficult 13 year old enthralled by such an odd and hopefully grim concept. Revisits in more recent years haven’t hampered my love for it though, which counts for something.

In its totality, the film is a freaky, carnivalesque examination of identity, masculinity, the pitfalls of love and what I would call a ‘Ship of Theseus’ approach to humanity i.e. at what point does the suppression of your naturally occurring human psychological traits render you something other than a human being? Andrew Howard is impressive as Jon, his virtually mute intensity, penetrating glare and South London tones cutting an unequivocally more baleful figure than the likes of Vinnie Jones or Terry Turbo could hope to achieve. Stabbing, flaying, shooting and battering without a second thought, Jon is the kind of quintessentially icy thug that you’re more likely to encounter in the haunts of genuine gangsters who take their profession seriously, and even he is overcome with awe and terror in the face of David Calder’s Tattooed Man. The highly cultured, almost demonic kingpin, who has a Munch-like etching on his torso for every life he has been responsible for terminating, pontificates to Jon with an avuncular Shakespearean cadence, as do his equally weird allies (an Asian crime lord and corrupt chief of police respectively played by Saeed Jaffrey & Clive Russell a.k.a GoT’s Blackfish), and he is unquestionably one of the evilest criminals ever committed to fiction.

With a drab, gritty approach to the casual vileness of British gangsterism akin to the themes of Neil Jordan and unsettling surrealism not unlike that of Peter Greenaway, Mr In-Between is an incredibly strange and dark experience, and I admire its courage in relating a familiar tale through a conduit of eccentric, malevolent despair. It will be a little too weird for some tastes, and it goes without saying that all who enter here should leave their hope at the door, but if you’re interested in an unusual approach to the crime genre that mostly gets it right, you may just find your palate sated by this one.