We are being tortured. This is the conclusion I’ve come to. Not only has our world been turned upside down by the horrors of the COVID-19 pandemic, but the powers that be, both ethereal and tangible, have committed to ensuring that we suffer as much as possible in terms of current media. The overwhelming majority of films to be digitally released in the past few months have been woefully inadequate in just about every sense, and it’s marginally better in terms of series to binge. In conjunction with all of the death and mayhem, this annum’s art so far will go down as a resplendently unfunny sick joke.

Ok, I know that’s cognitive bias, melodrama and then some, but come on. Like many others, I’ve been doggedly anticipating Christopher Nolan’s Tenet (which feels, and probably will be, a million years away), and with every month that passes, it takes on a shape that transcends ‘exciting-looking new sci-fi blockbuster from one of the best contemporary auteurs’ and looks increasingly like ‘the film that stopped the muck’. I endeavour to stop looking at it through that lens as that’s an egregiously unfair expectation to place on any film, but it truly has gotten to the point where something’s gotta give. Becky, the new effort from Jonathan Milott & Cary Murnion, is yet another arrival in the indefatigable slew of audience-insulting bollocks that cannot end quickly enough.

Becky (Lulu Wilson) is a little shit. That may be a harsh introduction, but it’s the truth. Yes, she’s only 12 or 13, her mother passed away a year ago from cancer and she hasn’t been getting along with her father Jeff (Joel McHale) very well, but she nevertheless makes it as difficult as possible to connect and empathise with her. Jeff appears to be a loving father who dotes on his daughter and strives to do right by her, and all she can do in return is offer him either the silent treatment, passive-aggressive adjustment of music to deafening volumes or outright yapping hostility. The kid has been through a lot but right off the bat, she’s a completely unlikeable arsehole.

Taking her away to their lakefront home for the weekend, Jeff surprises Becky by inviting his girlfriend Kayla and her son Ty along, announcing that he and Kayla are getting engaged. Admittedly a little sudden after a year, but the heart wants what it wants, Jeff having presumably suffered from the loss of his wife just as appallingly as his daughter. Offended and enraged, Becky storms out of the house to be alone in her treehouse/fort deep in the surrounding woods while her father tries to keep the atmosphere peachy for his newly blended family. 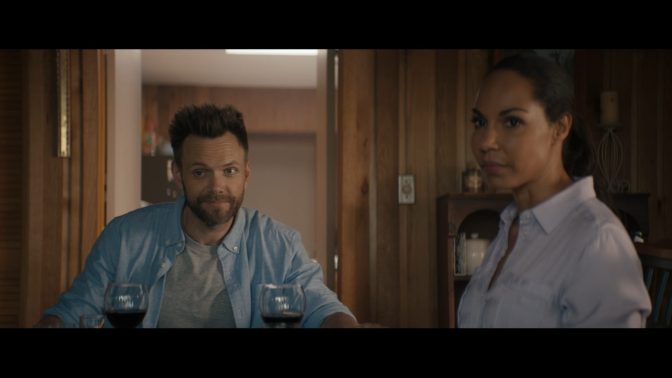 As the familial drama unfolds, something rather awful is underway. A crew of neo-nazi convicts led by Dominick (Kevin James. Yes, King Of Queens and Paul Blart: Mall Cop Kevin James) are en route to a new facility in a prison transport van. Accompanied by hulking man-mountain Apex (Canadian ex-wrestler Robert Maillet) and knuckle-dragging lapdogs Cole (Ryan McDonald) and Hammond (James McDougall), Dominick has a fellow inmate murdered on board so that the guards promptly halt the vehicle, at which point the racist rapscallions also kill them and change into police uniforms. Brutally murdering a father and two kids to obtain their car, Dominick and co. make haste to Jeff and Becky’s lakehouse. As Dominick pretends to be a passer-by with a lost dog, he notices Kayla and Ty (who are both black), mumbles some bullshit about dogs needing to be purebred, and has his cronies assault the family and take them hostage.

Dominick is searching for a mysterious key with a rune-like symbol on it, insisting that it is somewhere on the property and making it clear that people will be tortured and killed unless he receives it. As he terrorises Jeff, Kayla and Ty, he discerns that Becky is lurking in the vicinity and, using her and her father’s pair of walkie-talkies, communicates that he wants her to deliver his coveted weirdo key so he and his boys may be on their way, no more bloodshed being necessary. What he hasn’t counted on is Becky being a resourceful and dangerous badass, and she is fully prepared to screw them and their plans in the behind in the most insanely violent and inventive manner possible. As other filmic pundits have stated, is it essentially Home Alone on meth.

The most frustrating thing about Becky is that there are actually some promising outset trappings that go downhill extremely fast. It is well shot, and it must be said that the punky and abrasive title aesthetic and initially menacing antagonists engineer some hope for a solid if not particularly original home invasion piece. But what starts as tense and a little leftfield (owing mostly to Dominick’s bizarre MacGuffin key) quickly devolves into an inexplicable fiasco of gore and mind-numbingly nonsensical character arcs. I have an inkling that the character of Becky was intended to be a familiar embodiment of growing pains and teen angst, but Wilson’s portrayal renders her as little more than a detestably obnoxious, egocentric brat. The fact that she transforms from a scared and stroppy middle school student into Rambo with no explanation whatsoever is not cute, innovative, cleverly quirky or even amusing. Two other standout pieces of cinematic nuttery bearing a girl’s name as the title, Mandy and Hanna, pulled off fantastical violence and an otherworldly feel because their narratives and atmosphere were consistent. If Becky was attempting to jump on some sort of bandwagon, it’s a miserable failure.

And for the love of Christ, Kevin James? If you want to sink your film beyond repair, cast him as your central villain. The man cannot do intimidation. Certainly looking the part with the large frame, shaved head complete with an enormous swastika tattoo on the back, lumberjack beard and dead eyes, it all falls to pieces as soon as he opens his mouth. The fact that Dominick and co. commit some appalling actions throughout the film notwithstanding, they aren’t scary antagonists so much as annoying dipshits that you want to violently swat away with a spatula. James’ delivery seems very stilted and tryhard, you can’t just step down into playing a silently rageful sadist (if you want an example of a frighteningly laconic and evil prisoner done right, Niels Arestrup as Cesar Luciani in A Prophet is my golden standard). At no point did I feel menaced by Dominick or his three stooges, a factor that makes the film’s splatter all the more gaudy and embarrassing.

It’s not intelligent, funny, poignant or slick. The performances all-round are mediocre, many of the characters’ actions make little to no sense, and the violence comes across as a shambolic, overcooked imitation of early Peter Jackon-style lunacy. I don’t know what the hell they were thinking, so I extend warm thanks to them for leaving me with another evening of pondering what the earthly point of the project was in the first place. Do me a favour, and don’t.