I think that Netflix Original films get something of an inordinately bad rap. Many a forum and interpersonal conversation that I’ve happened upon seem to give off the vibe that there’s a consensus on N.O.’s , and it’s that they’re badly written, budgeted and directed. This certainly applies to diabolically awful pictures such as The Open House, The Cloverfield Paradox, The Ridiculous 6 and Death Note. But I believe it to be genuinely unfair to throw this blanket over all of the service’s original output. The Ballad Of Buster Scruggs, The Platform, Uncut Gems and Beasts Of No Nation were all uniformly great pictures in terms of performances, cinematography, narrative and soundtrack, a far cry from the lowest-common-denominator bargain-bin template that their primary distributor has come to be associated with. Maybe it’s a case of when and where Netflix had a significant influence over the actual production of the work, maybe it’s just a mere roll of the dice. In any case, it doesn’t follow to throw them all under the same bus of mediocrity. One of their latest offerings, Extraction, was never going to win any Oscars, but as far as I’m concerned it deserves commendation for pulling off that increasingly rare feat, a balls-out crazy action film that is still consistently well-paced and very well acted with pathos to smooth off the mayhem.

Tyler Rake (Chris Hemsworth) is a former member of the Australian SAS who now makes his living as a black market mercenary. With a quintessential troubled past, this tall, laconic brick shithouse is content to spend his free time boozing with buddies in the Outback and quietly reflecting. Returning to his abode after an afternoon of beers and underwater meditation (it looks strangely peaceful and also terrifying), Rake is greeted by Nik Khan (Golshifteh Farahani), a friend and fellow mercenary who requests his assistance in what couldn’t be described as anything other than a suicide mission.

Ovi Mahajan Sr. (Pankaj Tripathi) is the most notoriously powerful and dangerous crime lord in all of India, and he is currently behind bars for his various exploits. While out with friends one evening, his teenage son Ovi Jr. (Rudhraksh Jaiswal) is violently abducted by policemen and transported to Dhaka, the capital city of Bangladesh. It transpires that Amir Asif (Priyanshu Painyuli), a savage Bengali drug baron and Mahajan’s Bangladeshi equivalent, has kidnapped Ovi Jr. and will subject him to brutal torture and death unless his father pays an excruciatingly large sum for his release. Ovi Sr.’s lieutenant is ex-Indian Special Forces agent Saju (Randeep Hooda), who is aware of Rake’s reputation as a lethally efficient enforcer and reaches out to his associates to take care of the ‘heavy lifting’ so that he may return the boy home.

Committing to the titular extraction of Ovi Jr. from his captors, Rake proceeds to endure an insane onslaught of firefights, hand-to-hand combat, betrayals and unforeseen setbacks facing off against the virtually endless soldiers of Asif, a man who wields such power that he is able to order the lockdown of the entire city of Dhaka (my, what a pertinent plot device). With the youngster in tow, Rake is now Public Enemy No.1 in a no-way-out situation, where nobody can be trusted and he cannot entertain his team’s demand that he abandon the kid, feeling that his redemption for a lifetime of bad deeds and reget is well overdue. Cue an abundance of bullets, beatings and blood to follow. 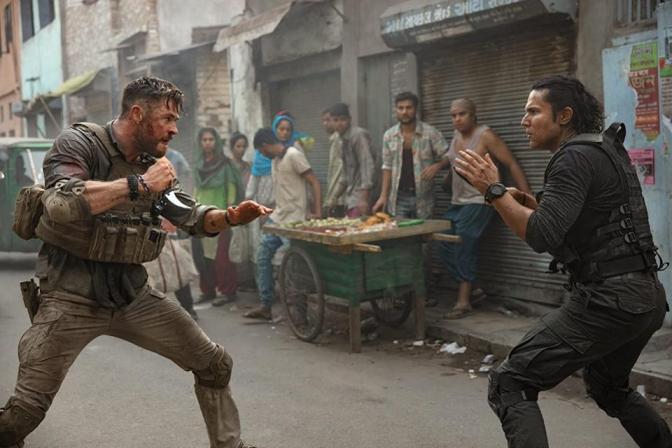 What elevates Extraction above similar films is its commitment to maintaining sharp suspense and, for once, actual decent acting. Many may roll their eyes at the notion of the ‘badass with a backstory’ trope, but Hemsworth’s Rake is an entertaining, charismatic and believably executed character, the emotional power of his performance forging a welcome relatability, you care about the dude. Of course, you expect some reason to give a toss in order to sit through any movie, but it’s a discernibly more concerted effort character-wise than the heydays films of Sly/Arnie/Dolph (sorry fellas). It’s also refreshing to see a blockbuster where the cynically exploitative romantic subplot never rears its ugly head, a nice subversion of well-worn current trends. The film’s villains are absolutely nefarious and barbaric, but, in diametric opposition to a lot of critical bone-picking, I didn’t find their characterisation to be one-dimensional in the least. Painyuli serves up a particularly interesting performance as Asif, he’s an utterly callous bastard as you would expect of any drug lord, but definitely not without moments of nuance and ambiguous countenance. I wholeheartedly disagree that any of the film’s Asian characters are flatly and/or offensively portrayed.

Speaking of which, several critics have lambasted Extraction for supposedly being another addition to the ‘white saviour’ formula. I’m sorry, but I find this to be tenuous at best. Rake is a mercenary, it’s his job to fuck people up and/or rescue them, and his quarry this time around just so happens to be the abducted son of an Indian criminal. There are no shoehorned scenes of culture clashing where Rake ‘learns something about himself’ that he was hitherto oblivious of in white society. The conversations that take place between Tyler and Ovi Jr. consist of humanistic bonding, they are two characters who already have a fundamentally upright moral compass, there is no ‘Well, I didn’t realise Indians thought this way as well’ bullshit. Rake’s team is racially diverse, with Farahani’s character of Khan being notable as someone who more than holds her own during the mission, saving Rake’s ass on several occasions. Nothing about this film indicates some contention that Rake is the only moral character or that he is somehow messianic. It’s just two sides at war, who both want to get paid and go home. A white main character in a multi-ethnic film doesn’t automatically make it a ‘white saviour’ film, and the accusation just trivialises the patently more condescending cinematic examples.

The action sequences are wonderfully choreographed, it feels like director Sam Hargrave hoped to evoke the experience of playing a full-throttle shoot-em-up, and it works. it’s rather axiomatic that you’ll have to suspend your disbelief somewhat generously, as the hyper-realistic variation on this tale would consist of Rake catching a stray bullet in his carotid or failing to catch an enemy’s blade in time, setting the end credits for about 15 minutes in. I know it might sound a bit patronising to say that, but I’m not sure what critics who dismiss films like this as ‘ridiculous’ were reasonably expecting. I’d understand it if Con Air had been marketed as a cerebral drama about the plight of the U.S. convict population, but it feels like many outlets drag this film through the mud because they are annoyed that it doesn’t attempt to be high art. Its intention was to be a vicarious rollercoaster of action, and it does its job. Also, it would be nice if people could stop with the ‘It’s just trying to do a John Wick/Call Of Duty mash-up.’ If you can accuse Extraction of somehow ripping off John Wick, it’s well within reason for me to accuse John Wick of ripping off The Raid. The Wick franchise does not objectively possess some kind of monopoly on extended action sequences.

It’s fun, it’s mad, and it has a lot of heart. It probably won’t provoke your thoughts, but if you’re looking for some satisfying, cleanly executed badassery with good acting and sumptuous visuals, whip out your Netflix and give this one a spin. I’m just genuinely hoping that they don’t franchise this one, as then it will inevitably reach the point where a man stands up and dusts himself off after being decapitated by a rocket launcher.