Yes, yes I know, Joker. It’s a smashing film, and it’s the one that hordes of critics and moviegoers alike exclaim to be the defining moment of Joaquin Phoenix’s acting career, save for his turn as Commodus in Gladiator. And he certainly was fantastic in his performance of Arthur Fleck, his usual steadfast commitment to method producing a frighteningly authentic portrayal of a gaunt, unstable creature on the fringes of society. It is enormously lauded as one of the greatest comic-derived pictures ever made, and it was Phoenix’s scary-eyed brooding intensity that made that at all possible. It’s almost mentally discomforting to picture anybody else taking on the role of Fleck, Phoenix’s seamless, bona fide exhibition of alienation and violent disorder carrying off brilliantly.

But as much as I thoroughly enjoyed Joker (I ended up venturing to see it twice because it was such a wonderful cinematic experience), I’m not as resolutely planted in the ‘Phoenix’s magnum opus’ camp as many others appear to be. The picture that really blew me away with Phoenix at the helm was one that had a very warm reception in the festival circuit before hitting cinemas here in the UK in March of 2018. It had a minimal buzz during its time on the big screen and now seems to have sadly slipped under the radar, due in no small part to its relatively tiny marketing and the fact that it’s nowhere near as accessible as Joker. Lynne Ramsay’s You Were Never Really Here is an unconventional, minimalist art-house crime thriller that was unequivocally my favourite film of 2018 and one that I giddily recommend to the unfamiliar, and it’s Phoenix’s mesmerising, understated lead performance here that will always spring to mind whenever his name is mentioned.

Phoenix plays Joe, a former marine who has been traumatised by his experiences in combat and a childhood at the mercy of his twisted, sadistic father. So haunted is he by memories, the only way he manages to calm his panic attacks and rage fits is to sit solitarily in his closet with a plastic bag wrapped around his head. An introverted and threatening man, he is a live-in carer for his elderly mother, and his hipster-like man bun and skater apparel hide a bulky musculature riddled with scars. When he isn’t humouring his surviving parent or introspecting in his own dysfunctional way, Joe brings home reasonably good bacon via rescuing young women who have been abducted by traffickers, and he does this with unfettered brutality. Eschewing firearms for hammers, knives, crowbars and baseball bats, he possesses an understandably visceral hatred of those who abuse the vulnerable, especially children, and he sees to it that they suffer before their demise. 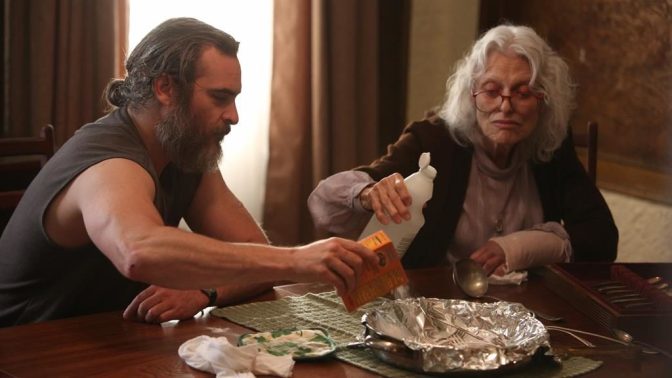 Receiving task intelligence from his enigmatic handler McCleary (John Doman, the ever-charming Rawls from The Wire), Joe is called upon one day to offer his services for a hitherto unusual situation. The young daughter of a prominent New York senator has been kidnapped by a paedophile ring, and her father promises to remunerate Joe with his biggest payout yet on the proviso that he hurts the culprits, badly. Acquiescing with his usual nonchalance, Joe sets about locating the girl with incisive viciousness, but comes to discover that a lot of omission and fabrication is at play here, his actions upsetting some immensely powerful and dangerous people, and embroiling him in a depraved, far-reaching conspiracy. Determined to keep himself and his young charge in one piece, Joe’s resilience and talent for destruction is needed now more than ever.

Phoenix’s performance here is a far more intimate, organic and simon-pure portrayal of mental-emotional trauma than his turn as Arthur Fleck. A deeply tormented man, Joe finds comfort in intermittently distracting himself with humdrum minutiae such as pot-lucking jelly beans until he finds his favourite colour of green, singing songs with his mother and playing a risky knife drop game with his bare feet. In realistic fashion, there is a very matter-of-fact, lamentable assertion that Joe will never fully overcome the events in life that have left him so troubled, but he can at least do some good with the remainder of his time by saving innocents from enduring horrendous fates. Even though he appears to be handsomely paid for his work, there is absolutely no trace of conspicuous consumption in his life, he and his mother living in a modest house in the New York suburbs, not to mention the fact that he always dresses casually and shops at a tiny local convenience store. For Joe, it’s all about the moral importance of the mission at hand. He unceremoniously dumps a previously trusted contact after the man’s son coincidentally witnesses him leaving the site of an assignment, indignantly citing the fact that any unnecessary knowledge of his identity will jeopardise his chances of operating. He’s a difficult and ruthless type to deal with, but in this line of work, you wouldn’t have it any other way. 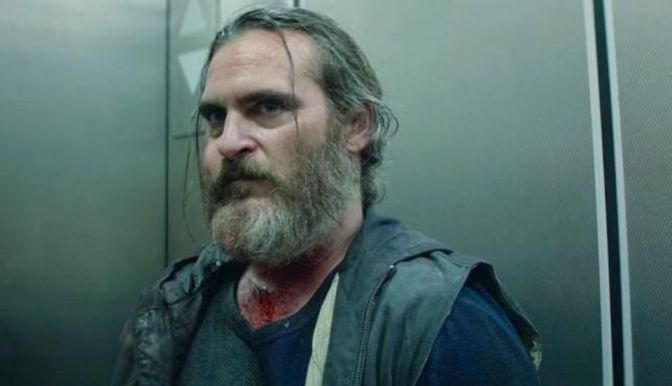 Bolstering this superb lynchpin performance is Ramsay’s uncanny ability to showcase the solitary nature of Joe’s existence, many sequences of quiet strolling, perching and deep contemplation amidst the carnage. With the exception of Joe’s mother and McCleary, all other characters come across as enigmas, comprehensively aloof individuals who are essentially unknowable. Shot over the course of a month during mostly sunny mornings and afternoons in the NY metropolitan area (one of the film’s alternate titles is A Beautiful Day), there is even further juxtaposition to the loud and grimy nighttime hubbub and open hostility that Fleck endures in Joker. Instead, Joe’s lone wolf nature is depicted against the backdrop of several counterintuitively pleasant-looking albeit desolate locales, with a sparse amount of his fellow humans in sight. Ramsay and Thomas Townend’s respectively lush direction and cinematography perfectly convey that Joe’s isolation is an axiomatic facet of his personhood, close contact with others likely to trigger more maladaptive behaviour in him. It’s in stark contrast to Arthur Fleck’s hunger for companionship, Joe having seen all too well what the world has to offer, and deciding that they can shove it.

I wouldn’t profess to know what specific mental health issues Joe suffers from, but if I were to hazard a guess, he bears many traits of schizoid personality disorder, very much unlike Fleck’s manic borderline quirks. He appears to derive a modicum of joy when being emotionally intimate with his mother, and his interaction with Nina, the focal young girl, consists of an intense and taciturn paternal vigilance unlike Arthur’s unintentionally creepy and awkward attempts at being nice to people. Outside of that, he is a veritably closed book. Rather like films such as the Gene Hackman works The Conversation and Night Moves, You Were Never Really Here is ultimately a character study that focuses on how Joe reacts to and copes with external factors as opposed to the factors themselves, as if Taken had been given an existentialist re-packaging for the museum-and-gallery crowd, i.e. was any good.

This is the defining moment of Phoenix’s career. An electrifying, anxiety-inducing and ultimately very beautiful film, it provides a brutal and moving examination of alienation, trauma, the banality of evil and redemption. We are only blessed with truly original motion pictures about outsiderdom every so often, and while Phoenix is a deservedly celebrated talent for his ability to portray fractured individuals (most famously in Joker, but other prominent shouts would be Her and The Master), this film deserves to be mentioned in conjunction with his name above all others. An absolute triumph.