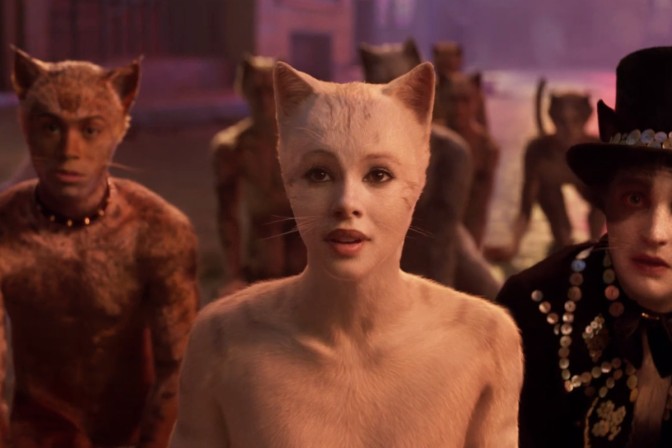 I remember one primary school trip, many moons ago now, where my class was taken to see the Andrew Lloyd Webber stage production of Cats, based upon T.S. Eliot’s poetry collection Old Possum’s Book Of Practical Cats. While I do recall being impressed by the choreography and musical numbers, something about it didn’t sit right with me. There was a weird and disturbing quality to the costume design and movements, not so much in a ‘Woah, I’m loving how leftfield and batshit this is’ way, more in a (to paraphrase Ian Faith from This Is Spinal Tap) ‘These people look like an Australian’s nightmare’ way. I mean, look at this shit for Christ’s sake: 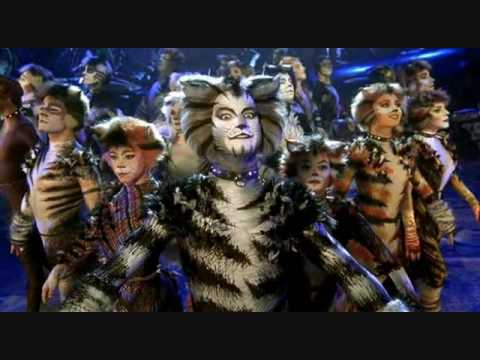 What is that? He has the eyes of a 60-year-old lifer who has just been given a 20-year-old peach of a cellmate. As for the cast, in general, looking like guests at a fancy dress party thrown by a cat lady on amphetamines, it makes perfect sense in context: It’s a stage production, and the only way you’re going to achieve a stage production where the principal characters are cats is to have human beings dressed up as a bunch of (really fucked up) cats. It would make sense for a screen adaptation to have animated ‘cat’ cats, correct? Well, I would have given anything to have just spent the past 100 odd minutes plonked in a theatre once more as I was all those years ago (or to even have had to sit through the direct-to-video film of the stage show), rather than having to endure this god-awful monstrosity whose creators need to be locked up in a mental home this instant. Cats is not merely the worst film of 2019, it is one of the worst films ever made.

The plot has been altered slightly from the original production, but remains fairly straightforward. The Jellicle Cats are a tribe of cats who live in London, and the young white cat Victoria has just been abandoned by her owner in their territory. Giddy at the prospect of a new addition, the group take her under their wing while blathering on about the ‘Jellicle Ball’, an annual ceremony where the Jellicle cats compete for ascension to the ‘Heaviside Layer’, a place in the sky more or less analogous to Heaven, where they will be granted a new life. There isn’t even a problem with the synopsis in an of itself, and with some semblance of sanity behind the filmmaking process (such as doing CGI imagery of cats, as opposed to hideous, nightmare-inducing humanoid feline abominations) it could have been a fun and poignant little animation, a perfect arrival for Christmastime. But no, they didn’t want to go there, did they?

The CGI is distracting beyond belief throughout the entire film, which makes for a viewing experience that can politely be described as enraging to the point of homicide. Seriously, I’m not exaggerating for some kind of effect, it was genuinely unpleasant to look at. It appears that director Tom Hooper was suffering from an episode of cerebral diarrhoea during production, as it seems to have evaded him that the Jellicles are humanoid on stage because they have to be. In the original poetry book, they are cats. Plain and simple cats. If you have the means at your disposal, they should not be looking like this:

I’m exceptionally disappointed that two actors that I love, Ray Winstone and Idris Elba, have put their name to this crap (though it was mildly amusing to see Winstone as Growltiger being briefly violent towards Bustopher Jones, played by the infinitely detestable James Corden). The most entertaining aspects of the film (I use the word entertaining as loosely as Katie Price’s nether regions) are undoubtedly those two, not because of bias, but because they were actually the least irritating. Credit where credit is due, they have made Elba look suitably unsettling as the story’s antagonist, Macavity, but that is where any positive reflections on the effects begin and end. 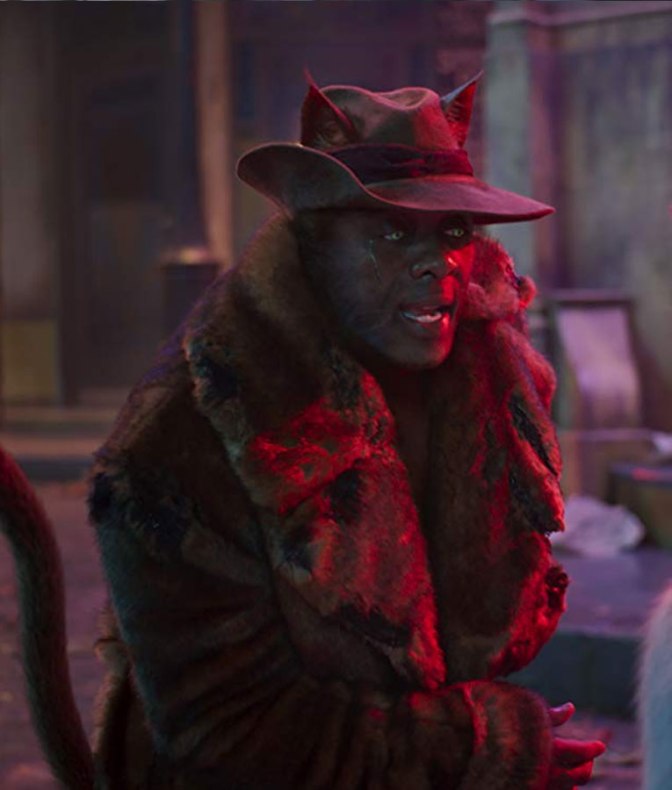 It is also with heavy heart that I posit my fears that two of the U.K.’s most beloved lovelies, Ian McKellen and Judi Dench, have been struck by a hyper-aggressive form of senility, as I can’t think of any other reason for their self-debasement here, particularly a horrible scene where Mckellen, as Gus The Theatre Cat, laps milk from a bowl in a manner that suggests he desperately wants somebody to grab a revolver and put one right through his skull. Whether that’s Ian in character or he was surreptitiously breaking the fourth wall, I’ll leave that up to you. Dench as Old Deuteronomy merely looks like an elderly junkie in a parka who just climbed out of a bin.

And also, this film should not have a U certificate. I’m no prude or advocate for censorship, far from it, but if I had any small kids that I’d seen this with, I’d be a lot more pissed off than I am already, there are a plethora of sequences that are overtly sexualised and plain weird, which I would find hilarious to watch with very old people, but not very young kids. I may be all about encouraging everyone to challenge themselves to watch certain films, and I hate the ivory tower elite of snobbish critics as much as the next person, but there has to be some modicum of standards. Blue Velvet is one of my all-time favourites, but if you showed it to your 5-year-old, I’d want you incarcerated (not that Cats is anything like that movie, because if it were, it wouldn’t suck donkey cock the way it absolutely does).

Bereft of charm, humour, narrative coherence and soul, Cats is a film that nobody should be seeing. The visuals and majority of the performances are so glaringly tacky that the plot developments are virtually impossible to follow (aside from James Corden, who I believe I mentioned I despise to the moon and back, the worst element is arguably Rebel Wilson as Jennyanydots, in a shrill and crappy part that seems designed to take a swipe at body-shaming). Go and watch the stage show if you must, because I can guarantee you that it would objectively be a more rewarding experience than this movie. Most definitely not better than a poke in the eye with a shitty stick.