Will Smith’s career-brain appears to have taken an enormous shit and died. He was a lot of fun as The Fresh Prince Of Bel-Air, and throughout the ’90s, his cocky humour lent a good deal of strength to crackers such as Men In Black and Enemy Of The State, and also to more drivel-inclined ventures like Bad Boys & Wild Wild West. You could depend on him to be that slightly goofy, confident and self-deprecating guy with good chops for slapstick and turn-of-phrase. And then somewhere along the line, he just got all weird.

I’m certainly not saying you should confine yourself to being a pony with one trick, as he had already shown a flair for seriousness in Six Degrees Of Separation, and would return to it in the forms of Ali and The Pursuit Of Happyness, and that’s never been a problem. The problem seems to be a self-awareness deficiency. What was once naturalistic charisma has been transplanted by a po-faced woodenness, coming to light in his roles in Seven Pounds (definitely a contender for most bizarre script in mainstream cinema), the abysmally pointless After Earth, and silly faux-existentialist twaddle Collateral Beauty. I’m aware that he isn’t writing or directing these films, but he still looks at scripts before agreeing to take parts, for Christ’s sake. In his attempts to redress the balance between funny tough guy Will Smith & ‘I am earnest-ing so hard right now’ Will Smith, we’ve received output such as Hancock and Focus (because those were necessary), Suicide Squad, an appearance in the Anchorman sequel, and eventually this thing here. It’s not a comedy, no. Nor is it a thriller, a drama, a fantasy or a horror. I don’t think anybody knows what it is, and it certainly doesn’t know either. Allow me to introduce…Gemini Man.

Henry Brogan is the best government assassin in history. He is almost impossible to defeat in hand-to-hand combat, is able to get a clean shot at a target on a bullet train from a distance of two kilometres, and appears to be impervious to the effects of falling from great heights and being in the vicinity of enormous explosions. Yes, he works for the Defense Intelligence Agency and is an ex-marine, but that doesn’t explain Terminator-like physical abilities. Henry is now fed up with all of this murder lark and he wants out, a nice and quiet retirement somewhere in rural Georgia. This exposition takes place in the space of about 10 minutes, with Henry discussing his misgivings and change of heart with some guy who is never properly introduced to the audience, and some deftly handled product placement. (Sorry, didn’t seem to be able to find a still of the blatant-as-fuck bottles of Coca-Cola & Stella Artois)

He meets a boat rental manager (played by the lovely Mary Elizabeth Winstead, who made the film somewhat bearable), who turns out to actually be another D.I.A. agent, and after a few episodes of mass assassination, some shady emails and file tampering, and a really stupid and pointless cutaway scene involving the guy who is never properly introduced to the audience and his delinquent son, we learn that Henry’s old employers want him dead. And they’ve sent him to do it. Yeh, I know. ‘Huh?’ 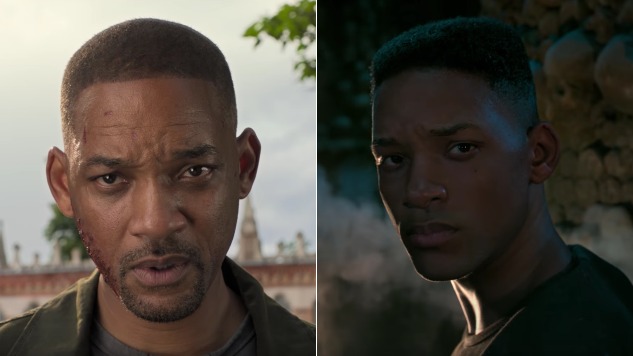 He is the best assassin that ever lived, and now he’s retiring? Well, we need to clone him, obviously. We also need to whack him out, because he’ll be a liability, or he knows about the cloning operation or something. With an admittedly decent use of de-ageing technology, 51-year-old Will Smith’s principal enemy for the majority of the film is 23-year-old Will Smith. As for their facial expression for the majority of the film, see above.

When I first saw the trailers for Gemini Man, the film that came to mind was 2012’s Looper. The plot device there was a time loop, as opposed to cloning, but they’re both still action movies with the same central conceit: What if you were locked in a battle to the death with yourself? Looper managed to flesh out a narrative that is tightly suspenseful but one that was also rich in pathos, smartly conveying the kind of existential pandemonium you’d likely find yourself in. In Gemini Man, the entire film appears to have been pulled out of an Ideas Rectum. The cloning element isn’t satisfying in context, it’s just randomly there in the most contrived way possible. You could have made this film as a simple pedestrian action thriller, with no sci-angle whatsoever, and it wouldn’t actually make a lick of difference.

And then there’s the Big Bad…Clive Owen? Like Liam Neeson, Clive is another middle-of-the-road actor from this side of the Atlantic that Hollywood has decided is bankable as hell. He shows up here with the requisite angry-and-slightly-confused facial paralysis that Smith pulls off so well, polished off with a non-committal American accent, and proceeds to aggressively snarl plot developments at the audience before a cut. If you had removed him entirely and had Young Clone Smith as the central villain (even as his son, as opposed to a carbon copy), I would wager a healthy sum that the result would be far more interesting and entertaining, even if it is a story that has been done to death by far superior films. 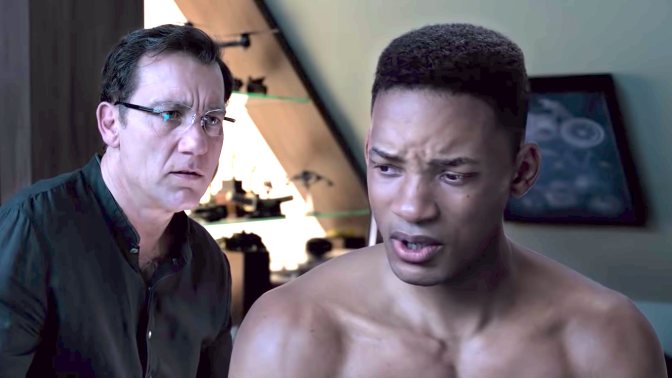 My ultimate annoyance with this film is the fact that the central theme is one that could have been handled in a clever and refreshing manner, whilst still being popcorn fodder, but it doesn’t even get that right. All of the relationships between the major characters are A-cup flat, and the dialogue consists of absolutely dreadful quips that are supplemented by lowest-common-denominator philosophical musings. It’s as if the pitch meeting went something along the lines of: ”Look, we all know film fans are a bunch of simpletons, so let’s give them some food for thought with their explosions and firefights, and inject the film with some really shallow, dumbass rhetoric. Sound good?” The buzz surrounding the movie’s 120 frames-per-second gimmick is also sure to be met with disappointment. The effects are wonkier than a kindergarten crayon gallery.

To wrap it up, I will give this film one compliment: I laughed my arse off, albeit for all of the wrong reasons, so I hope it will bring you the same joy. I’m bizarrely looking forward to Bad Boys For Life, in the hope that Smith still has what it takes to poke fun at himself in a stupid film that knows it’s stupid. If he doesn’t, send for the men in white coats.