The prison movie is a strange beast. From Darabont’s The Shawshank Redemption, arguably the most famous example and one that still comforts audiences with its warm and optimistic humanism, right through to the unpolished kitchen-sink brutality of Alan Clarke’s Scum and the true-events thriller trappings of Siegel’s Escape From Alcatraz. It is the one genre where the dynamics of the microcosms therein couldn’t be more diverse, the politics and pecking orders, and how they shape the protagonist’s learned lessons, can be enshrined in triumphant journeys to enlightenment and integrity. They can also be stark, disillusioned treatises on humanity’s worst elements packed into too small a space.

This fluidity, as with any genre, will occasionally produce an idiosyncratic picture that incorporates some fragment or another of the aforementioned styles, and yet still retains its unique voice, as is the case with this sometimes tender, sometimes surreal, consistently unsentimental study of a young man who walks through the door an ingenue, and emerges from the other side as a seasoned and confident villain.

It’s difficult not to feel a modicum of sympathy when you first meet Malik (Tahar Rahim), a jittery and dysfunctional French kid of North African origins, as he is led into what will be his home for the next six years, some vague reference of fighting with cops being the catalyst. He looks constantly furtive and bewildered, is unable to read, write or even properly articulate whatever he is thinking and feeling in any given moment. Life is going to be tough here for this pup. 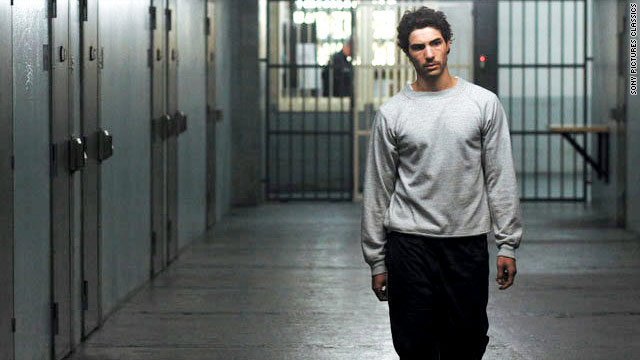 A nice (and thankfully not overdone) touch is the nod to France’s notoriously problematic race relations, the prisoners of both Saharan & Sub-Saharan descent (who are all largely Islamic) opting to self-segregate, yet simultaneously spurning Malik, as he is irreligious, ignorant of prison decorum, and doesn’t even speak Arabic. With the remaining population consisting largely of bog-standard white Frenchmen, gypsies and other European nationals, Malik is a man without a country. For the meantime, at least.

As with many a prison film, there is a gang here that rule the roost, backed by prison officials, subject to special privileges, their word is non-negotiable. In Shawshank and Scum, you respectively had Bogs Diamond, with his thoroughly creepy, sexually predatory gaggle of thugs known as The Sisters, and merciless brick shithouse Pongo Banks, who, to his twisted credit, did the majority of his own dirty work, his idiotic sycophants Richards & Eckersley predominantly serving as lookouts and constantly blowing smoke up his arse. In the case of A Prophet, the counterparts here are a considerably larger worry, being a group of around 30 prisoners hailing from the French Island of Corsica, all of whom also happen to be made men in the region’s most powerful organised crime syndicate.

Their boss (an outstanding turn by veteran actor Neils Arestrup) is Cesar Luciani. A character that has rightfully been asserted as one of the better examples of a realistically complex antagonist. With his surly countenance and lack of any trace of human empathy, Cesar’s volatility and consummate intolerance of failure are precisely what you’d expect from the ringleader of a crew of incarcerated gangsters, but the film is always careful not to dehumanise him, an aspect that makes him all the more disturbing. At around 60 years of age, and with many a decade in the game, Cesar is now fatigued more than anything, a look of forlornness etched on his face in the few scenes we see of him awaking in his cell, quietly lamenting the glory days of an empire that he is now too old to be as giddy about anymore. He feels that his nation has irreversibly transformed (unsurprisingly, he’s also something of a bigot), and this comes very much into play when he and his cronies corner Malik in the yard one day and make him an offer he most definitely cannot refuse.

”We need another prisoner whacked out. Either do it, or we’ll kill you as well”, to paraphrase the aforementioned offer. That’s it. No bargaining, no reasoning, no silky Morgan Freeman tones coming to his rescue. Malik has to grow a pair and grow up, and he needs to do both fast. There are is no such thing as Deus Ex Machina in this world, and Malik’s enactment of the deed is quintessentially messy, brutal and depressing. But nobody cares, and the only way he’ll have a decent shot at survival is accustoming himself to that fact immediately. Now under the protection of the Corsicans, he quickly becomes their lapdog, following through with terse orders, being constantly berated for his ethnic background and (as far as they’re concerned) his lack of common sense, and being well advised to keep his mouth shut and put up with all of it.

In a strange yet non-jarring narrative turn, Malik’s residual conscience manifests in spectral visits from his initiatory murder victim, who doesn’t show up to torment our hero, instead providing him with the only substantive existential connection that he has whilst inside, keeping him company during his more introspective moments. His brief spells of remorse notwithstanding, Malik happens to have a little more to him than the gormless, meek fool that his sadistic handlers have him pegged as. Slowly but surely gaining more of Luciani’s confidence via being as servile and unquestioning as he possibly can, he begins to see exponential opportunities for subterfuge and individual advancement, building his own clandestine network, giving us the reckoning that, in time, Malik El Djebena will be a name that sets palpitations haywire and stops conversations dead in their tracks.

At 2 hours and 35 minutes, the film is a sprawling crime saga, sharing common ground with the likes of The Godfather and Scarface, but whereas those films played on audience veneration of mobsters with lush, life-in-the-fast-lane imagery and sombre operatics, the key characters within A Prophet don’t inspire the reverence that gangster-flick aficionados hold for the Corleone’s men of respect or the foolhardy adulation for Antonio Montana that many a rapper has cranked out in their repertoires. In this prison, the occasional crag of sunlight makes it way into an inmate’s cinder-blocked window openings (they’re lucky for it to be overcast when out in the yard), and the day-to-day atmosphere is something akin to the drab, pushy noisiness of a social work centre or busy council office. Cesar’s smartly casual attire and Rolex may convey that he invests some degree of care and self-respect in his appearance, but his measured movements and heavily weatherbeaten visage show a man who doesn’t take any enjoyment from his station, his stunted emotions and need for dominance means that he has to work on and over other people, never for them or alongside them. The only hope, desire or sentiment that he ever seems to communicate to people, is that it would be very much in their favour to not wind him up, though the triggers for doing so are about as predictable as the lottery.

The film’s uncomfortably realistic depiction of many inevitabilities of prison life (and especially the sort of inevitabilities that go with the territory of being aligned with a bunch of callous sociopaths) is offset by Malik struggling to maintain his humanity throughout the ordeal. He is not unnecessarily cruel, and a good deal of his behaviour indicates some semblance of healthy emotions and a concern for some basic ethics, but he is where he is and ruthlessness is an axiom. This understated multifacetedness is what makes A Prophet a crime epic that stands out like few others.