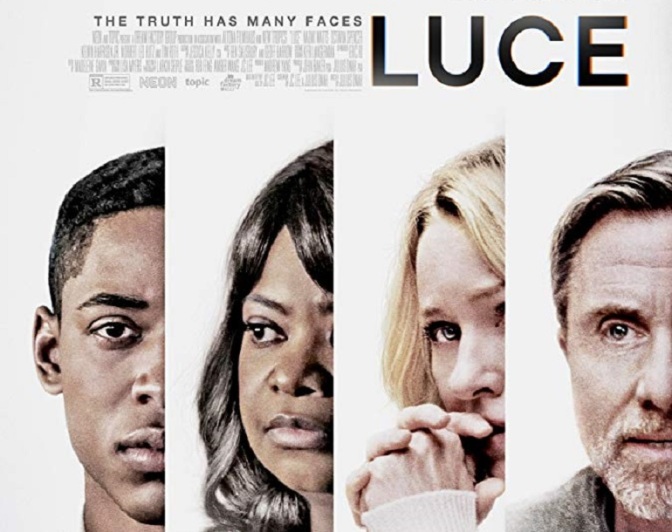 ”What’s the difference between punishing someone for being a stereotype, and rewarding them if they’re not?”. This is one of many arresting questions that form the heart of Luce, a film that plays almost like a psychological thriller, but is ultimately a frank, angry dissection of the realities faced by people in minorities, people who have been ‘othered’ by the historical narrative right up the present day, even if the status quo is comparatively far subtler than it was 50 years ago.

The titular character (played by the increasingly impressive Kelvin Harrison Jr., of It Comes At Night fame) is an American success story. Born in Eritrea, and trained until the age of 10 to be a child soldier, he has been raised by his white middle-class adoptive parents to excel both academically and socially. Well-spoken, confident and diligent with regards to his health and appearance, Luce is the epitome of perfection, his popularity cemented by his personability and conscientiousness as much as it is by the fact that he’s not a bad looking dude, and fit as a butcher’s dog to boot. Alas, there is something disturbing brewing underneath all of this brilliance.

Luce’s immeasurably proud parents Peter and Amy (Tim Roth & Naomi Watts) are contacted one day by Ms Wilson (a formidable Octavia Spencer), the young man’s history teacher, and one of a minuscule concentration of folks who think something might be amiss with our hero’s perpetually congenial demeanour. If the discovery of a brown bag full of extremely dangerous fireworks in the lad’s locker wasn’t enough, he has also recently submitted a paper for an experimental writing assignment, in which he critiques society from the perspective of Frantz Fanon, a black political philosopher who argued that the only viable way for colonised peoples to achieve true liberation is through acts of violence. Understandably enraged and upset, Amy outright refuses to entertain the notion that her amazing progeny has any other character than the one he presents, but as accusations mount, and certain details about certain things just don’t add up, the audience is dragged front and centre into the debate that rages amongst the key players: Is this incredible teenager actually a deceptive, terroristic sociopath? 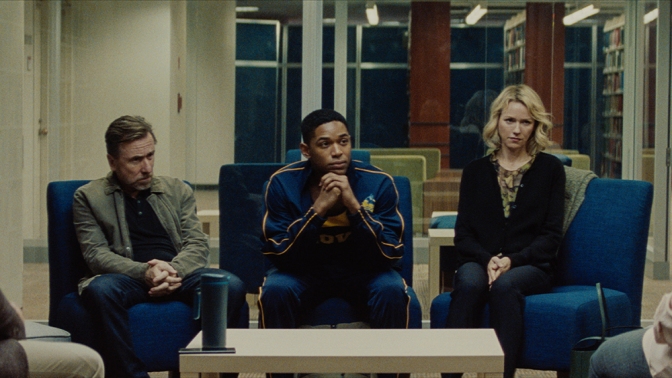 The film has drawn many comparisons to 2011’s We Need To Talk About Kevin, but I would posit this as a rather lazy and myopic juxtaposition. A particular strength of Luce is that the audience are just as baffled by the charges against the young man as those who love him, whereas Ezra Miller’s central whippersnapper in the aforementioned film is an openly unpleasant bastard from the minute that he is shat out into the world. There is a case to be made that his character is a born psychopath, and he naturally says and does harmful things for the sake of the harm. Luce, however, hints at repressed rage over all-too-real injustices.

At one point, a particularly apathetic and aggressive character is referred to as being ”black-black”, and Luce as being ”Well, just Luce”. This illuminates a core theme that guides the boy’s ambiguous personality shifts, suggesting that the warrior that was supposedly bred out of him via years of intensive therapy and Americanisation has, in fact, been dormantly cultivating a more calculating and sinister thought process all along. The people around him are not generally in awe of his excellence, they are in awe that a young black guy could possibly achieve anything higher than being a thuggish, weed-smoking dropout. Their racially predicated expectations have shoehorned him into a saint-monster dichotomy, leaving him little room to simply just be himself. A white kid being either a success or a loser is seen as something self-contained, but if Luce were to mess up in the same manner, he’d be indicative of ”ghetto culture”, the whole ”You know what they’re like” mentality. Instead, he’s a shining example to be aspired to, ostensibly for everybody, but especially for minority children. This arbitrary allocation of responsibility is something that makes you empathise strongly with his frustration, and yet fearful that this same frustration has culminated in a twisted psyche, capable of devastating action.

Ms Wilson represents an altogether different approach to this cultural problem: You need to just play the cards that you’re dealt, as best you can. Indignation, sadness, protest, even violence, none of this will put a dent in the system that boxes you up on the basis of your skin colour, where your ancestors are from, gender, physical ability, etc. She holds the minority students to a higher standard because she knows that the wider world will follow suit, offering this as her own brand of tough love that is to be embraced, let alone accepted. Any other approach is naivety at best, and a lie at worst. Just count yourself lucky that laws and societal norms have progressed to the extent that you’re able to even become a success, regardless of the fact that you’ll have to fight ten times as hard to achieve it. Whether or not this is down to jadedness, realistic humanitarianism, or just plain shilling for the establishment, Luce neither likes it nor buys it, and their contentions surrounding these issues form a dynamic that is both intellectually stimulating and quietly terrifying. 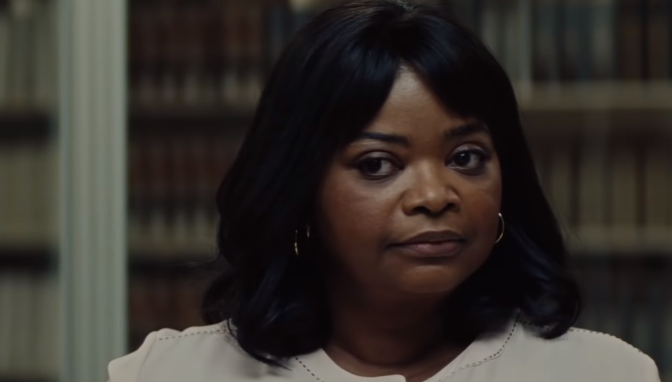 Director Julius Onah and playwright JC Lee have taken the work of the latter, which had its origins on-stage, and moulded it into a rare creature: a genuinely suspenseful piece that induces discomfort, not merely because of its creepy, thriller-oriented framework, but because it asks hard and provocative questions about race in contemporary America, and offers no simple answers to them. Whether you think problems are caused or minimised by militancy, apathy or being so ”woke” that you can’t see the forest for the trees, it will make you scrutinise all of your assumptions, ask yourself questions that you hitherto have not, and ultimately wonder just how amicable a conclusion can there be to the journeys of all involved. A very uncompromising film indeed, and one that I’d urge you to see as soon as possible.