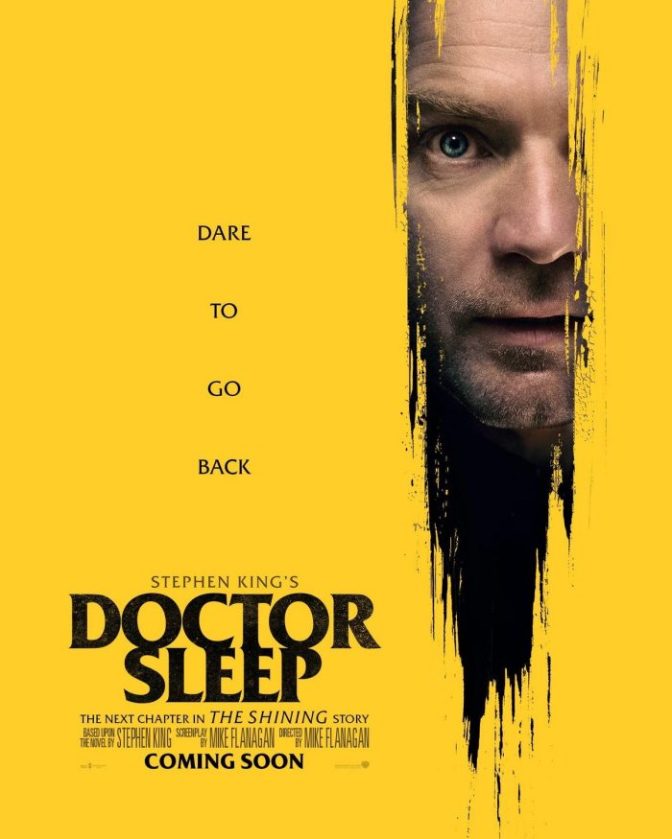 First of all, let it be said that I did not dislike this film. Excellent performances, splendid cinematography and a very deft implementation of the iconic Carlos-Elkind score from the original film, all of these components made it an interesting pleasure to watch. It is as respectful of both King & Kubrick as it could be, but, perhaps counterintuitively on my part, it sort of didn’t work. Allow me to explain.

The 1980 film adaptation of The Shining (as you’re more than likely aware) is widely revered as a horror masterwork. Psychological horror was already a sub-genre with some potent titles under its belt, Roman’s Polanski’s Repulsion & Rosemary’s Baby being stalwart examples, but Stanley Kubrick’s magnum opus took it to something of an operatic scale, examining mental and physical deterioration facilitated by alcoholism, domestic abuse, latent fury owing to failing on one’s goals in life, and more ambiguously, malevolent ghosts haunting an old hotel in the Rocky Mountains. It took Stephen King’s fairly straightforward tale of bad supernatural influence and turned it into something elliptical, penetrating and mysterious, something that could easily make any audience feel like they were slowly heading for the same laughing academy as Jack Torrance. Jack is the film’s tangible antagonist, whereas Grady, Lloyd, 237’s resident hag-beast, all these folks have a perpetual light of doubt shone on their actually existing outside of Jack’s fractured mind. Even pointed clues that seemingly wrap it up, such as Danny’s visions, Wendy’s own experiences with the spirits, Jack being released from the storage room, they don’t actually nullify the proposition of collective mental illness, actually emboldening it from a certain perspective. It is because of this motif that having Doctor Sleep occur in precisely the same cinematic universe as Kubrick’s film produces a weird, disjointed effect that only hurts it, unfortunately.

On the film’s high plus points, it is a faithful and commendable adaptation of the bulk of Doctor Sleep, King’s 2013 sequel to The Shining, and the portrayal of the story’s central villains, the True Knot, could not have been handled better. Like some abominable marriage of Mr. Dark’s carnival from Something Wicked This Way Comes and the roving vampires of Near Dark, this tight-knit, fearsome crew of creeps achieve quasi-immortality via feeding off of ‘steam’, a smokey, winter’s breath-like substance that emits from children who ‘shine’, produced whilst torturing them to death. Utterly selfish and callous, they operate mostly at dusk, eyes glimmering in their feeds, terrified of death while butchering kids, not with indifference, but with a disturbing, animalistic hunger. As far as they’re concerned, entitlement is an understatement. Leading this most vile menagerie is the plucky and satanic Rose The Hat, played with a frolicsome, perverse cold-heartedness by Rebecca Ferguson, in what is easily the film’s greatest performance. With her top-hat, melodic Irish brogue and maternal demeanour, Rose initially seems nothing more than the eccentric ringleader of a bunch of long-in-the-tooth carnies, but she is a monstrously intelligent apex predator, having no theory of mind, caring of absolutely nothing beyond her own will to survive. Hats off to her (yeah..I know), Ferguson has brought to life an antagonist that is terrifying in a way that I have not seen for a very long time.

The True Knot become aware of the presence of a child with a particularly forceful shine, Alba, and set out to utilise her in their brutal fashion, not counting on her psychic connection with our hero, one Daniel Torrance. In what is a rather moving touch, Danny has progressed from the strange, terrified little boy with severe fits to a fortysomething drifter with the best parts of Jack amplified, the worst still sadly lingering. Ewan McGregor infuses Danny with a plaintive and tired earnestness, the least you’d expect after the events of 1980’s winter at the Overlook Hotel, trying to make an honest living, conquer his inherited love of booze, and do everything he can to completely block out his abilities and forget the carnage it wreaked all of those years ago. He feels like the only way he can truly know his dad is via living what he remembers of him, a tragic and pointless feat, as it mostly consisted of non-stop drunkenness and barely repressed rage. 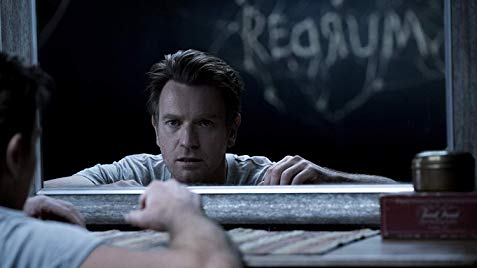 Danny and Alba both get wind of the Knot’s activities, and together, they will stop them. All very fine and dandy, well-paced and convincing up until this point. But something’s gotta give eventually, and it’s the constant callback to the Overlook, Kubrick’s Overlook.

It’s no secret that Stanley Kubrick and Stephen King essentially fell out because of the narrative path that Kubrick wanted to take, King being upset that the script excised many of the novel’s subplots, including the more heavily emphasised themes of Jack struggling to maintain sobriety, his strong anti-authoritarian streak and the genuinely deep affection he felt for Danny and Wendy.  It’s fairly easy to sympathise with King, not merely because he was seeing his hard work modified in ways he didn’t like, but because the novel was largely autobiographical, Jack Torrance acting as something of an alter-ego, trying his damnedest to stay on the wagon and battle his demons, be they literal or figurative. Jack is already rather kooky and highly impatient with his family from the film’s outset, already causing the audience to feel wary of him, a change that, along with the alteration of the motives of the Overlook’s Trans-Atlantic spooks, turned the novel’s foundations upside down. There was no more Good All-American family vs. Evil Ghosts dynamic, Jack as the deeply troubled yet deep-down decent patriarch, attempting to resist the will of the spirits and protect his wife and child from both them and himself. This time around, Jack felt like he was truly home long before any dark forces started digging their claws into him, and when Delbert Grady advises him to enact a terrible deed against Danny and Wendy and take his place as part of the hotel’s essence, he doesn’t take much convincing. Also, in another stark deviation from the original novel, Grady and his phantom cabal want Jack because he’s ”always been the caretaker”, they display little to no interest in Danny’s shining abilities, whereas on paper that was what they coveted the most.

Do you recall American Psycho II: All American Girl? I’m not about to egregiously insult this film by placing it in the same category as that abscess of a movie, but I think it’s pertinent to cite how it wasn’t merely the terrible everything about that film that turned audiences off, the one particular thorn in the side was the fact that American Psycho (both novel and film) are intimated to take place entirely in Patrick Bateman’s head. It wasn’t a serial killer flick, it was a satirical commentary on the vapid hedonism and materialism of 1980’s yuppies, with the homicidal mania kept ambiguous at all times. To then have a sequel where it is established that everything in the previous work 100% occurred in reality, and that it has had ramifications within a wider cinematic world, is lacking in sense and undercuts the effectiveness of the larger story. None of this would actually be any kind of a gripe had this adaptation erred on the side of being more faithful to both the original novel forms of The Shining and Doctor Sleep, but there is obviously a catch-22, as it would be virtually impossible for it to be taken in any way seriously had it not paid homage to Kubrick’s film. I don’t want to be too unfair to it, it is a very competent supernatural thriller, but to have the 1980 version’s unique vision of isolation and madness serve as bookends for what is essentially a superhero film, it just left me a little dumbfounded.