After three utterly diabolical follow-ups to two films that send me rocketing back to childhood every time I see them, I sat in the Odeon somewhat anxiously, sure that I was about to endure more drivel that completely mutilated the origin stories established in The Terminator and Judgement Day, and was utterly bereft of any of the emotional punch and genuinely kick-ass set pieces that have enshrined those two as perennial classics.

Cue a fantastic opening sequence splicing Sarah Connor’s terrifying monologue to Dr. Silberman during one of their recorded sessions with static, worn-taped production company logos, and my anticipation rapidly began to pick up, the instalment that Terminator purists had been waiting for was finally upon us, one that respected the irreproachable freshman and sophomore efforts, and yet still managed to carve its own unique, worthy insignia on the franchise. And while there is a lot to admire, it doesn’t come without setbacks.

A somewhat heart-warming factor is that the two best things about the latest offering are Arnold Schwarzenegger and Linda Hamilton, two founding members as it were.  They’re both crusty now, but fortunately, their talent is not. Hamilton’s grizzled and cantankerous demeanour suits it perfectly, it’s the ultimate stage in evolution for Sarah Connor, a character that began as a skittish and victimised waitress, progressing to quasi-sociopathic commando and eventually becoming the female equivalent of Snake Plissken. Her performance is infused with many a fun wink and nudge to the two initial films, subtle salutes to the fan-base that thankfully don’t provoke any eye-rolls, similarly is the case with Schwarzenegger.  I won’t give away any crucial exposition, but it is safe to say that his inclusion involves a rather weird and questionable narrative shoehorning, yet his deprecation of his iconic role is what provides the film with genuinely good comic relief, many cuts above the dreadful sparkle glasses and ”Talk to the hand” catchphrase that we were tormented with in Rise Of The Machines. 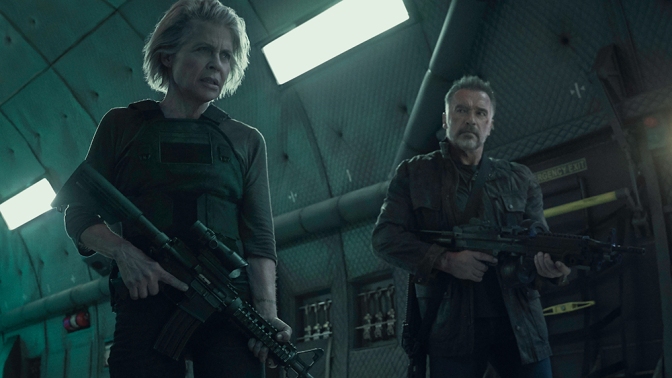 The problems manifest from the outset with the introduction of Mackenzie Davis as Grace, the guardian sent from the future, an augmented human soldier who has been tasked with protecting Dani Ramos, a young Mexican woman with some vague importance in a future war with malevolent AI. Grace is essentially a superhuman variation of Kyle Reese, someone we are intended to empathise with and simultaneously fear, given her ability to rip out a throat in three seconds flat. Davis’ performance in and of itself is good enough, but the character of Grace is, sadly, too flatly written. A lot of the supposedly badass quips in her dialogue come across as lazy and cringe-inducing, and as the film progresses, she begins to look less like an exemplarily tough resistance fighter, and more like an awkward, self-absorbed whiner, locking horns for no good reason and allowing her emotions to interfere with the clear head required for her mission. Sure, Kyle Reese is guilty of that when he begins falling for Sarah, but he doesn’t suffer a ridiculous personality crisis and make counterintuitive decisions in the process. The same has to be said of Natalia Reyes as Dani, Grace’s ward, unceremoniously plucked out of an unremarkable existence and informed of a role of importance that she couldn’t hope to process, much like Sarah. I can’t say I was sold on how rapidly she seemed to transition from average Jane to a deadly embodiment of Girl Power, given that one aspect of the original Terminator that makes it work so well is that Sarah is still a confused and frightened woman at its conclusion, it would have been clunky to have her truly begin bearing the teeth that she would eventually show as the formidable warrior of Judgement Day. As for John Connor as played by Edward Furlong, he’s a 10 year old punk with a pet cyborg bodyguard to play with, and his reactions to all events are pretty lockstep with that.

The element that made The Terminator and Judgement Day so special was ultimately the powerful emotional connections amongst the protagonists, the groundbreaking special effects and ingenious hi-tech time travel narratives ultimately come second to that, as mesmerising as they are. Kyle Reese’s bond with Sarah weighted the first film with some incredible poignancy, though we all know the real heart at the centre of The Terminator universe is the T-800’s surrogate fathership of John Connor. Anyone who says they saw that as a youngster and didn’t bawl their eyes out during the final moments is a barefaced liar. Aside from the emotive dual presence of Hamilton and Schwarzenegger, this film simply doesn’t get its wings off the ground in its attempts to make us really give a damn about how either Grace or Dani will fare.

As for the film’s central antagonist, the Rev-9 Terminator model, played with an impressively sinister blankness by Gabriel Luna, it is merely another unstoppable chunk of liquid metal, albeit one that is more deserving of being mentioned in the same breath as Robert Patrick than Kristanna Loken’s T-X ever was, with an exoskeleton that looks oddly similar to the black, Lovecraftian symbiotes from last year’s Venom when it starts to pool back together. There are several disturbing moments that rival the T-1000’s assault on John Connor’s step-family residence in Judgement Day, but aside from that, this villain simply doesn’t carry the presence that Arnold Schwarzenegger and Robert Patrick’s respective baddies did in 1&2.

Ultimately, this film is lightyears better than Rise Of The Machines, Salvation or Genysis. If there needed to be a third instalment, this one trumps all of those tenfold, and there were plenty of moments where I grinned widely at its reverence for the first couple of films, which was actually handled pretty deftly. It most definitely has heart, and I take my hat off to it for that, but the weakness of its two focal leads and some drawing board CGI make it difficult to mention in the same sentence as two films that ignited a pop culture phenomenon.