For a film that seemed to spark an almost apocalyptic frenzy, accusations of being some kind of paean to an America that never existed anywhere except in the minds of the alt-right, and being all manners of problematic, I find it difficult to summarise if it is a reputational help or hindrance that Joker just ended up being a finely-crafted, reasonably dark slice of cinema. No racism, misogyny, homophobia or any other kind of ugly bigotry showed up in a single frame, save for the hostility that our hero, Arthur Fleck, receives on account of his bipolar-induced skittishness and his pseudobulbar effect, which causes him to laugh and weep uncontrollably. It has many an uncomfortable moment, punctuated by episodes of excruciating violence, but it is nothing that is going to shock anyone accustomed to films such as Taxi Driver (its biggest and most obvious influence), let alone edgelord trash like A Serbian Film, The Human Centipede, list ad nauseam. It’s just a movie about a guy with a lot of problems being consistently treated like a physical and mental-emotional punching bag by virtually everybody he comes into contact with, until he follows the natural path of such treatment, and goes completely batshit. Great acting, rich cinematography, a cracker of a soundtrack, intelligent writing. It will certainly go down as a classic option for the average group of pals’ weekly huddle for movie night.

The only real problem associated with the film’s reputation is this notion that we are ”now living in a post-Joker world, cinematically”. There is no one source to that sentiment, it has been echoed all over social media for weeks now. And as I’m writing this, I’m still squinting and pinching the bridge of my nose, attempting to figure out what that is even supposed to mean.

As superbly performed as the character of Arthur is (Joaquin Phoenix, always the trustworthy non-dud), there isn’t anything palpably idiosyncratic about him that will make him a stand-out movie icon. If you look at the film’s two primary influences, Taxi Driver and King Of Comedy, you’ll see two protagonists who are a story unto themselves. Travis Bickle, honourably discharged U.S. Marine, somewhat racist and rather thick, likes whiskey with his cornflakes in the morning and is under the impression that his problems in life are caused by women he values being ”taken away from him” by a scuzzy pimp and glad-handing political candidate. So he kicks off, bloodily. That’s a whirlwind of a psyche right there. Travis isn’t even a man who is victimised in any particular way, he allocates a black-and-white, good-or-bad category to the people he comes into contact with, and all hell breaks loose when his delusions are either shattered or fortified. Arthur tries desperately to be polite and accommodating to everybody he meets, and is cruelly rebuffed for real, not in his mind. He’s more like an ultra-meek variant of Michael Douglas’ D-Fens in Falling Down, taking everybody’s shit until he inexorably cracks, rather than reacting with immediate hostility. The resemblances he bears to Rupert Pupkin from King Of Comedy are superficial as well, being an obsession with achieving fame via stand-up routines and unhealthily projecting his fantasies onto a talk-show host (an on-the-nose yet amusingly welcome turn by De Niro, this time sitting in the seat Jerry Lewis previously occupied). When all is said and done, Arthur is actually a pretty nice guy for the most part, he just wants an ordinary life, exemplifying the Golden Rule of Reciprocity and making people laugh to boot, whereas Pupkin is a textbook case of extreme Narcissistic Personality Disorder. This oily, pathologically untruthful freak openly steps on anybody who isn’t of any use in getting him where he wants to be, his smarminess going unnoticed only by the most untrained of eyes. One character in recent years who seems like he could be Rupert’s bastard son is Lou Bloom, the similarly revolting and disingenuous opportunist brought to life by Jake Gyllenhaal in 2014’s Nightcrawler. Poor Arthur is simply that, poor Arthur. He certainly needs professional help, but his pathologies don’t run anywhere near as deeply and toxically as the aforementioned characters. For the most part, that is 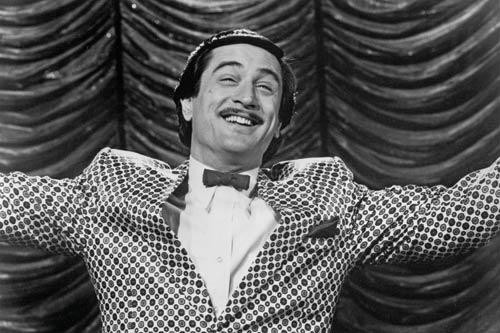 Joker certainly can’t be accused of welshing on it’s outset promise. It said it was going to be a fresh and original origin story, with a portrayal completely unlike the incarnations seen before it, and it delivered. But it delivered in a way that, at least in my mind, doesn’t display any discernible segue into sequels that will become a new gateway into old worlds. Heath Ledger and Jack Nicholson’s Jokers were both clearly unhinged men, just to understate the hell out of it, but they also had sharp criminal acumen. The Joker is a complete nutter, but he knows how to hit the establishment where it hurts, pulling off daring and complex exploits, knowing how his adversaries think, and painting Gotham red with his own anarchic outlaw philosophy. But Arthur doesn’t convey any of that. He commits outrageously destructive acts because he’s past breaking point and doesn’t even bother to attempt to outrun his inevitable punishment. There is nothing there to suggest that he could even begin to become the calculating extremist who is the ultimate Bane of the life of Wayne. His donning of the iconic dyed hair and Machiavellian Clown Prince suit seems like the last vestige of self-deprecating humour left in the damaged mind of a very sad man, not the career beginnings of a supervillain.

Ultimately, this is a great film that I’d happily watch again, no criticisms intended for the content itself. It’s the very well-told tale of a lonely and confused guy descending further into madness, but the only point it really raises and focuses on is: ‘Be nice to people’. Nothing too deep or analytical about obsession with celebrity culture, people with extreme personality disorders being left unchecked, or what root societal causes are facilitating Arthur’s collapse, save for his unlucky (and somewhat improbable) talent for meeting dickheads 24/7. It works perfectly as a standalone movie, but the word through the grapevine about it being a groundbreaking film on an almost otherworldly level won’t help it in cases of extreme audience expectation, and is frankly just a bizarre thing to bandy about.